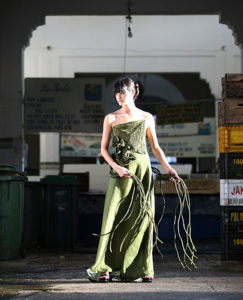 The invitation is a much sought-after approval by fashion houses and guarantees the two couturiers a slot on the official catwalk schedule during Paris couture week. The next season will take place over four days from Monday, January 22 to Thursday, January 25, 2018.

Amir is a Moroccan-born designer, noted for making film costumes in the 1990s and known for creating “wearable sculptures”, who received the distinct honor of an exhibition in the Fondation Pierre Bergé-Yves Saint Laurent in March 2016. [Read More…]

“I accumulate a mountain of materials, then I touch, I mix, I experiment … I start with the middle, the belly around which the dress is created, and I never know when I stop. The shape is created by itself, it is born from the material.”